MACAU, CHINA - Media OutReach - January 23, 2019 - Igniting Macau with the power and intensity of a lightning bolt, the hugely anticipated ElÄ“kron -- the world's first all-electric indoor theatrical stunt show -- launched with a bang at Studio City tonight as it excited celebrities, dignitaries and VIP guests at its spectacular world premiere. 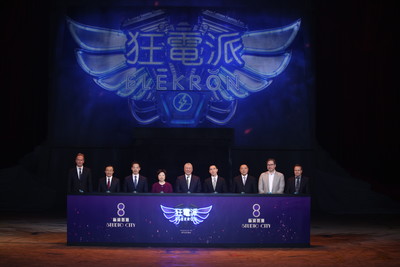 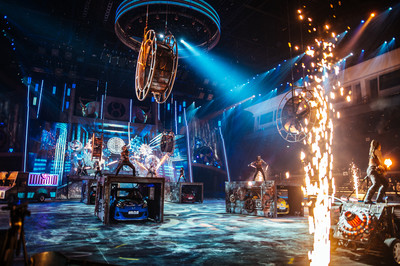 ElÄ“kron represents a beacon of hope in a fictional post-apocalyptic world. In this fantasy realm, the performers play a unified nomadic tribe who must race against time to confront and redirect powerful electrical forces, creating a heroic story of survival in a land where nature has careened out of control. 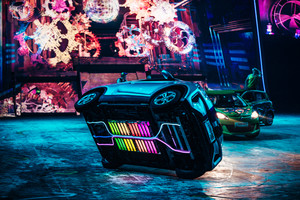 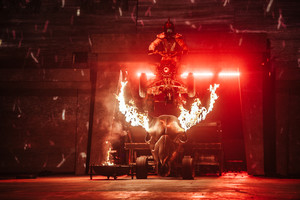 ElÄ“kron performs with all-electric sports cars, customized buggies, quads, trials bikes and FMX bikes wowed the crowd with a succession of high-octane feats and daredevil jumps performed at super-close range to the audience, while fireworks and pyrotechnics provided added flashes of excitement throughout. 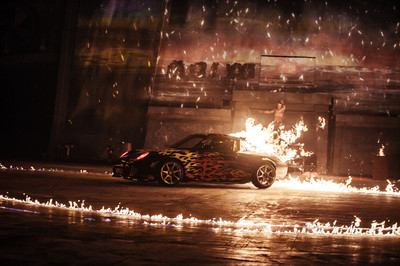 One eye-catching highlight includes setting a Porsche on fire and driving it around the arena while motorcycle riders and buggy drivers chaotically drop in from the top of a huge projection screen at a height of 12 meters, at an incredibly steep 65 degree angle and come screeching to a halt just a couple meters from the audience.

Following the unprecedented success of The House of Dancing Water at City of Dreams, ElÄ“kron is the latest must-see attraction brought to the city by Melco Resorts & Entertainment. Developed in partnership with globally renowned entertainment architects Stufish, and with the full support of the Macau SAR Government. The show features dozens of powerful custom-made electric vehicles designed exclusively for ElÄ“kron, engaged in a rapid succession of exciting feats.

Before the premiere, a host of honored guests -- including executives of Melco and Stufish, Macau SAR Government officials and ElÄ“kron ambassador Shawn Yue -- attended the red carpet event and grand opening ceremony to celebrate the show's official launch. For the next 75 minutes, the death-defying stunts and non-stop action kept guests glued to the edge of their seats.

ElÄ“kron is an ancient Phoenician word meaning "shining light", and in the context of the show it represents a beacon of hope in a fictional post-apocalyptic world. In this fantasy realm, the performers play a unified nomadic tribe who must race against time to confront and redirect powerful electrical forces, creating a heroic story of survival in a land where nature has careened out of control.

Against the backdrop of an abandoned power station, all-electric sports cars, customized buggies, quads, trials bikes and FMX bikes wowed the crowd with a succession of high-octane feats and daredevil jumps performed at super-close range to the audience, while fireworks and pyrotechnics provided added flashes of excitement throughout. One of the shows highlights came from The Kangaroo Kid, two times Guinness World Record holder of the Longest Ramp Jump on a Quad Bike, who stopped the audience's hearts with his highly technical maneuvers and bold jaw dropping stunts on his powerful quad bike. All of the excitement throughout the night is confined to a tight space of only 900 square meters, smaller than an Olympic size swimming pool, requiring drivers to have impeccable control over their high-torque electric vehicles.

Other highlights include setting a Porsche on fire and driving it around the arena while motorcycle riders and buggy drivers chaotically drive up and drop in from the top of a huge projection screen at a height of 12 meters, at an incredibly steep 65 degree angle and come screeching to a halt just a couple meters from the audience. The biggest cheer of all arrived when an electric biplane soared right over the crowd with seven world-class aerial wing-walkers dancing on top.

Assembled from all over the world, the cast of ElÄ“kron is comprised of more than 150 international performers, creative specialists, designers and technicians. All the vehicles featured in the show are bespoke and designed from scratch, and powered by Tesla motors with a custom-designed control system. Defying the laws of nature and mankind, ElÄ“kron is set to electrify Macau starting tomorrow.

Mr. Lawrence Ho, Chairman and CEO of Melco Resorts & Entertainment, said: "ElÄ“kron is the latest in a long line of firsts for Melco and Macau.  Together, we are creating a world class destination for tourism and the MICE industry.   And like everything we do at Melco, it's a product of successful, creative, hardworking partnerships with some of the world's finest talents.  I'd like to thank our co-producers Stufish for bringing this spectacle to life, and the Macau Government for continued support and enthusiasm for the innovations we bring to the city."

Maria Helena de Senna Fernandes, Director of the Macao Government Tourism Office (MGTO) said: "We appreciate Melco's efforts in bringing yet another world-class attraction to Macau through ElÄ“kron. We believe the launch of ElÄ“kron will once again put Macau at the forefront of the global entertainment industry. The Macao Government Tourism Office will continue to collaborate with leading resorts like Studio City, to further promote Macau as a top global destination for leisure and entertainment."

Shawn Yue, Hong Kong celebrity and ElÄ“kron ambassador, said: "That was intense! I knew this show was going to be something special but nothing can prepare you for what it's like to see those incredible stunts being performed at ultra-high speeds right in front of you-it was absolutely mind-blowing!!  "

"ElÄ“kron has proven that everything is possible! All the death-defying stunts have such a small margin for error, the choreography of every jump, dive, and leap has been dialed to perfection. I just love the highly technical and original theatrical experience ElÄ“kron created, it is definitely a high-energy, adrenaline-pumping and exciting live show to watch!"

Mr. Ray Winkler, CEO and Design Director of Stufish Entertainment Architects said: "From our first meeting with Melco, we knew that we had the chance to create something original here in Macau, and I think the results speak for themselves. Combining Stufish's expertise in creating world-class performance experiences with Melco's bold and pioneering vision, ElÄ“kron sets dizzying new standards for live entertainment."

Studio City is set to take Macau's entertainment destination proposition to unprecedented new levels, by providing a 'next generation' of outstanding entertainment-driven leisure destination experiences that will help the territory's evolution into a truly international tourism center.

The Hollywood-themed studio-concept resort is a thrilling new cinematic inspired entertainment and leisure destination and is designed to be the most diversified entertainment offering in Macau. Ideally located on Cotai, close to the Lotus Bridge immigration point connecting Hengqin Island and a future station-point for the Macau Light Rapid Transit, Studio City will deliver more world-class entertainment amenities than any integrated resort in the market.

Studio City is destined to deliver an unparalleled leisure entertainment and hospitality experience, strengthening the depth and diversity of Macau's leisure, business, and tourism proposition as a leading visitor destination in Asia.

Stufish, founded by the late and legendary Mark Fisher, has an international award-winning portfolio including theatrical and musical productions, touring shows, concerts, as well as permanent/temporary entertainment architecture. Some examples of Stufish's high profile tours include Elton John's Farewell Yellow Brick Road tour, the Rolling Stones' No Filter tour, Beyoncé and Jay Z's, On The Run II tour, and U2 Experience + Innocence 2018, as well as tours for Madonna, Lady Gaga, Robbie Williams and more.  Exhibition design includes Pink Floyd: Their Mortal Remains, the highly acclaimed and largest selling music exhibition of all time at London's Victoria and Albert Museum. Award winning examples of their bespoke permanent building designs are the Han Show Theatre and Dai Show Theatre in China. UAE projects include the FIFA World Cup Opening & Closing ceremony Abu Dhabi 2009, UAE 4th Anniversary Show Abu Dhabi 2012, Qasr al Hosn-Story of a Fort Abu Dhabi 2013, and Qasr al Hosn master planning competition 2015. Stufish also designed the opening and closing ceremonies of the Beijing Olympics 2008, the Asian Games 2010, and the 5th AIMAG Opening Ceremony in Ashgabat, Turkmenistan 2017, as well as many sets for TV shows of which the MTV Video Music Awards (2017) and the National Television Awards (2018) in the UK are recent examples.