SINGAPORE - Media OutReach - 23 January 2019 - The Football Association has partnered with Twitter to give football fans in Southeast Asia unprecedented access to key moments from this season's Emirates FA Cup. 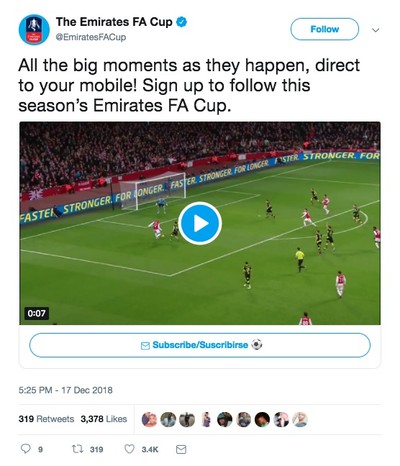 As part of a revolutionary new approach to in-game highlights distribution, users will receive a @mention notification within minutes of the action taking place. Highlights clips will be a maximum of 30 seconds in length, with users receiving up to four clips per half. Further two minute highlights clips of the game will delivered from midnight, followed up by an extended 10 minute package from midday, the day after.

The service will be promoted via a DM card on users timelines and when the user engages with the DM, the DM bot is launched and supporters will be able to select their favourite team[s] and share their registration and in-game clips with friends, and manage their subscription.

If their preferred team is knocked out, fans are given the opportunity to re-subscribe to receive clips from another of the available teams still in the competition.

The breadth of teams and international markets is expected to increase in the second season.

The partnership follows the growing international popularity of the competition and the new six-year overseas broadcast deal which commenced at the start of this season and sees the Cup now broadcast in over 150 territories worldwide. It is hoped that the increased provision of content will continue to build awareness and audiences in the selected markets, including Thailand, Malaysia and Indonesia.

Outside of the registered Twitter service, clips of the biggest in-game moments and highlights packages, such as Goal of the Round, will be promoted on the @EmiratesFACup Twitter feed and in relevant markets to push content to a broader audience. Tasked with clipping and delivering the match-action across both projects is the competition's broadcast production partner, Input Media and content media agency, Social Chain.

Georgina Lewis, Head of Marketing at The Football Association said: "Worldwide interest in The Emirates FA Cup is greater than ever. The partnership with Twitter is vital to ensure the competition remains at the forefront of fan engagement and ensures that fans across the world have live access to some of the biggest fixtures, regardless of their daily schedule or location.  This approach fits within our overriding strategy to be innovative in delivering experiences in line with how modern fans are consuming sports media and want to engage with the competition in the future."

Bruna Zanin-Juresic, Sports Partnerships at Twitter UK, said: "We are thrilled that fans around the world will have a new way to follow the Emirates FA Cup this season, directly through Twitter. The Football Association have always been incredibly innovative in their use of the platform, so it felt like a natural fit to partner with them to give fans unprecedented access to one of the most prestigious knockout competitions in global football."

Twitter is what's happening in the world and what people are talking about right now. From breaking news and entertainment to sports, politics, and everyday interests, see every side of the story. Join the open conversation. Watch live streaming events. Available in more than 40 languages around the world, the service can be accessed via twitter.com, Twitter Lite (mobile.twitter.com), an array of mobile devices, and SMS. For more information, please visit about.twitter.com, follow @TwitterSG, and download both the Twitter and Periscope apps at twitter.com/download and periscope.tv.