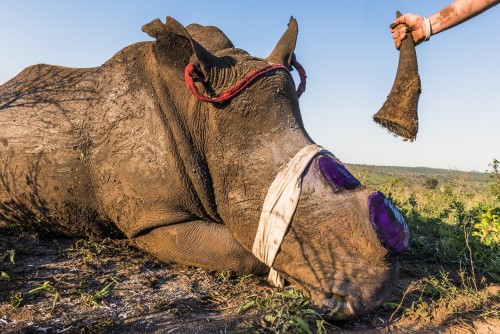 The form of this agreement would be a Protocol under the United Nations Convention Against Transnational Organized Crime (UNTOC), the main international legal instrument in the fight against transnational crime.

Government representatives, crime experts and civil society partners are currently meeting in Vienna to discuss the global challenges of transnational organized crime at the tenth session of the Conference of the Parties (COP) to the UN Convention against Transnational Organized Crime. The proposed new Protocol will be discussed during a virtual side event organized by the EWC at the COP on Friday 16th October at 2pm (UTC+2), register here.

The proposed "Protocol against the Illicit Trafficking in Specimens of Wild Fauna and Flora", would criminalize the intentional illicit trafficking of specimens of wild fauna and flora.  The negotiation and adoption of any new Protocol is a matter for States (countries), and whether these proposed reforms move ahead will be determined by the States Parties to UNTOC.

States Parties to the proposed Protocol would agree to adopt legislation establishing as a criminal offence the illicit trafficking of any whole or part of a wild animal or plant, whether alive or dead.  Among other commitments they also agree to the exchange of information on known organized groups suspected of taking part in illicit trafficking and the means of concealment of contraband, the sharing of forensic samples, verifying the validity of documents, enhancing controls on the means of illicitly transporting specimens and taking measures to discourage demand.

If a Protocol is adopted, this would be the fourth Protocol to UNTOC, the others being on human trafficking, migrant smuggling, and illicit manufacture and trafficking in firearms.

The Protocol would signify recognition by States Parties of the devastating scale, nature and consequences of wildlife crimes, of the need to scale up collaborative efforts to prevent and criminalize them, and provide States with the means to do so.

This is the second briefing paper on international law reform released by EWC, with the first being a set of proposed amendments to the Convention on International Trade in Endangered Species of Wild Fauna and Flora (CITES) to include public health and animal health criteria into the Convention's decision-making processes.

Scientists estimate that 6 out of 10 known infectious diseases in people are zoonotic, meaning they are  transmissible between animals and humans.  Of the emerging infectious diseases, 3 out of 4 originate from wildlife. Scientists are increasingly worried about the spread of zoonotic pathogens and, in light of the devastation caused by COVID-19, their potential humanitarian and economic impact

Meanwhile, the World Bank has estimated the value of illegal logging, fishing and wildlife trade at USD$1 trillion or more per year, when taking into account the impacts of such crimes on esosystems and the services they provide, the loss of government revenue, and the value of the contraband.

"Illicit trafficking in wildlife exacerbates corruption, insecurity, and poverty, has a devastating impact on entire ecosystems, including their ability to sequester carbon, and it poses a risk to public and animal health" Scanlon said.  "Yet there is no global agreement on wildlife crime. Given the enormous consequences for people, our planet and our health, now is the time to move forward with bold and necessary reforms. We must leave the next generation with a system that is fit for purpose in a post COVID-19 world, one that helps ensure a healthy and prosperous planet, and gives us the best chance of avoiding future pandemics."

EWC, is an initiative of organizations working on wildlife crime and trade related issues and is hosted by the Hong Kong based ADM Capital Foundation, chaired by Scanlon and with a Steering Group comprising the Born Free Foundation, the Global Environmental Institute the ICCF Group and the Food and Land Use Coalition. More information on the Initiative, including its Steering Group, the organizations that have signed up as Champions of the Initiative, and its Special Advisers and Supporters, can be found on the EWC website here.